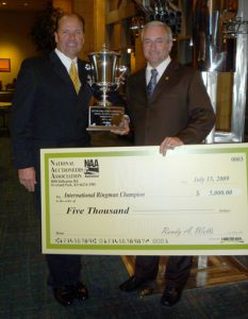 July 15, 2009, Overland Park, Kansas – Mark Younger of Maryville, Missouri was awarded the title of International Ringman Champion at the 60th International Auctioneers Conference and Show in Overland Park, Kansas. This year was the third year for the competition and fifteen ringmen participated. The event is presented in partnership with the Professional Ringmen’s Institute.
A second generation auctioneer, Mr. Younger started in the auction business at 14 and has been in the business for over 33 years where he now owns and operates Younger Auction Co. LLC. The auction firm specializes in real estate, farm machinery, antiques and specialty auctions. In addition to competing in the International Ringman Championship competition, Mark also competed in the International Auctioneer Championship held on July 17, 2009 among 90 contestants from various corners of the United States, Ireland, London and South Africa. He was among the 15 finalists and ranked in the top 10 along with his sister Anita Younger-Espey who was among the 7 finalists out of 30 women competitors.
Mark displayed his talents and bid spotting skills and was judged along with his fellow competitors on his ability to interact with the audience and communicate bids to the auctioneer.
As the 2009 International Ringman Champion, Mark will receive a championship ring, trophy and prize money.
In Marks words, “To be a great Auctioneer I have to be a great Ringman. These are two important qualities of an Auction, because Auction without the ‘u’ spells Action and with a Professional Ringman you have a successful Auction with Action.”
Emmette Barron, CCIM of Decatur, Alabama was awarded first runner-up in the competition, followed by second runner-up, Sam “The Hit man” Grasso of Baltimore, Maryland.